If we asked you to pick one instrument to play the soundtrack of a Western movie, odds are most of you would pick harmonica, not ukulele. Still, this amazing (and hilarious) ukulele orchestra called The Ukes put their own spin on one of the genre’s most recognizable tunes and it is glorious.

Heck, it’s more than just playing the notes, it’s as if you’re watching the movie itself which shows not only how effective the music can be, but also how fun. You can tell they’re having a blast playing it so it’s no wonder it’s so much fun listening to it.

She Starts Cutting Into Her Mini Blinds

Woman Adds Oatmeal To Houseplants To Stop Them From Dying, But That’s Not Her Only Trick

Crew Member Tells Mom To Get Off Plane. When She Asks Why, They Say She Can’t Go Home Just Yet.

Pianist Plays In Department Store, Immediately Jumps Up To Give Elderly Woman A Chance To Play

Woman Gives Food to Blind Raccoon, Then Hits Records When He Brings His 2 Tiny “Bodyguards” 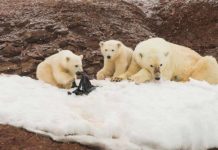