Friendship has no boundaries – it comes in all shapes, sizes… and species apparently. Sri Ram the puppy and Bernie the calf are proof that true friends can see past their physical differences to love the soul within.

While Sri Ram and Bernie came to know each other through unfortunate events, it all worked out in the end when they got a new home and a new family. Without Juliana Castañeda, the founder and director of Juliana’s Animal Sanctuary in Colombia, the pair may have not survived for too long, but now they get to live happily together for the rest of their lives.

One day, Juliana came across a bag of four abandoned puppies while out in the woods of the sanctuary grounds. She brought the poor puppies home with her and tried to adopt them to loving homes. Sri Ram was the only puppy who was not adopted, so Juliana kept him with her.

Meanwhile, Bernie the baby cow had been born on a dairy farm. Due to Bernie being male, he was not considered desirable by the farmers so his owners set out to sell him. When his owners realised that he would likely meet an upsetting fate in a slaughterhouse, they changed their minds and took him to Juliana’s sanctuary, hoping that she would give him a better home. 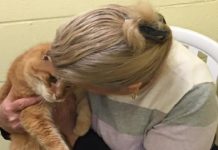