A proud pet parent and her Irish Wolfhound are winning fans across the globe because of their clever costumes for Halloween. A photo posted on Reddit shows the former Miss Delaware, Kate Banaszak, and her Irish wolfhound, Kellan, dressed as characters from the 90’s film classic ‘Wayne’s World’.

Banaszak sports Wayne Campbell’s look with the plaid shirt and a black cap while holding an inflatable guitar. But it’s her dog, Kellan, who wins the prize for his “Garth Algar”, with his thick black-framed glasses, blond disheveled hair and goofy happy grin. 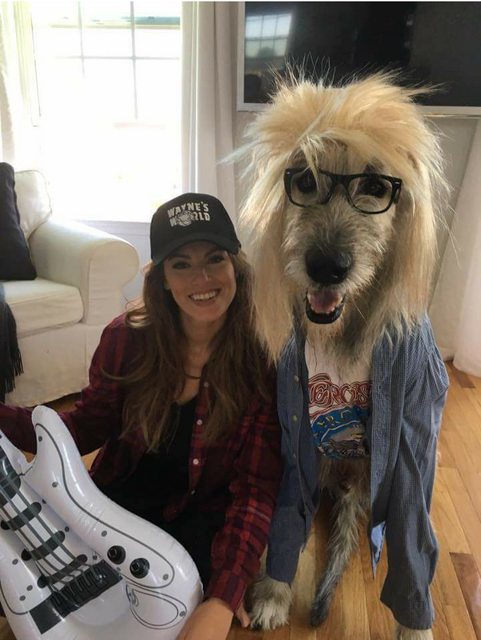 Banaszak told news outlets that she’s a fan of the movie and Kellan is a always a good sport about her Halloween costume aspirations. Banaszak told The Huffington Post that not only does Kellan look the part, he embodies Garth’s spirit.

“He digs classic rock, he’s a lovable guy, an awesome best friend, and he even has his own dream woman,” she said. “Though, instead of a hot blonde, it’s a bullmastiff named Nike that he met in agility class. Still, I’m pretty sure Hendrix’s ‘Foxy Lady’ plays in his head when he sees her,” she said, referencing scenes from ‘Wayne’s World’.

Share this duo’s cute costumes with your family and friends!