Meet Mr. Cornelius, a pug mix with a grumpy face and the character that made him an internet star!

While Mr. Cornelius was living in a shelter nobody wanted to adopt him because everyone thought he was sick. His skin was pale and pinkish and his face was unlike any other dog there. The truth was that he wasn’t sick (at least not seriously), he was just different.

Mr’ Cornelious suffers from a partial pigment deficiency, a mild form of albinism if you will. A trait that made most people pass on him was exactly the trait this couple fell in love with.

They saw just how cute he was and decided to adopt him. Not only is he cute but Mr. Cornelius turned out to be one wonderfully eccentric dog! 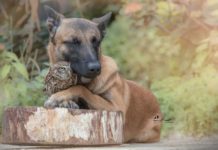