This video below features a really heartwarming reunion of a long lost dog and his owners. 20 months ago, this dog named Gunnar went missing from his family home in Verona. His owners searched for his everywhere but they couldn’t find him. Their every attempt failed and at last they lost hope of finding him. Until this very day!

From the day he went missing, Gunnar had been living in streets. Poor fellow couldn’t find his way back home and had to struggle alone. But the Pittsburgh Animal Care & Control was able to rescue Gunnar. They were informed about him running around in Squirrel hill and captured him. They found a micro-chip on his collar and that is how they were able to inform the owners about Gunnar. 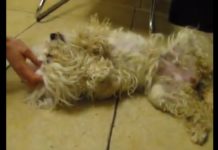