As people were walking through the shopping mall in New Zealand, they didn’t pay attention to the senior lady next to them. She, on the other hand, had other plans for the hour, and when the song “Feeling Good” came out on the speakers, she didn’t hesitate to break out into the dance right in the middle of the square. The energetic grandma left everyone stunned with her routine, but if you think this is the end of the tape, prepare to watch more.

You will never believe what happens next. A few seconds after the senior lady comes in the center, she is joined by other people, all of whom are ages 65 to 96. They certainly break the record with their performance, and now, the merry team is called “The World’s Oldest Flash Mob”. They are no teenagers, but they show us that age is just a number and you can stay young at heart if that is what you like.

Also, seniors are shattering popular stereotypes about elderly people and want to overthrow the sayings about those, who sit around the house because this is their favorite pastime. More than 80 people join the lady at once, and together, they make the routine complete.

However, you shouldn’t dismiss the tape as a mere source of fun and entertainment, because it is so much more than that in reality. The elderly people are sponsored by Lifemark. This is an independent organization that is famous for rating the houses for people with special needs.

Meet Einstein, the Smartest Parrot Who Will Impress You with His Vocabulary. 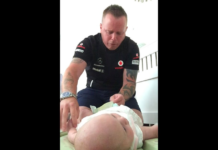