Whether we want to admit it or not, we’re all guilty of judging others in some capacity. It’s only human to do so as we try to orient ourselves in our environment, but that doesn’t always make it right.

To admit that we can be prejudiced is not exactly flattering, as it paints a rather bleak and dark side of ourselves.

The father in the story below was also not very proud to expose that side of himself, but he decided to go ahead and do it so that we could all learn something very important from his son instead.

Why not try to see the world through a child’s loving and unprejudiced eyes?

Blanton O’Neal was out with his 11-year-old son, Sean, when he came across something that could happen to just anyone — it’s easy to make the same mistake.

“I debated making a post of this as it paints a not so flattering picture of me as a person. But I think in the end it is a picture of many of us if we are truly honest with ourselves.

Yesterday, as Sean and I traveled to NC for his soccer tourney we stopped at an exit near the N.C./S.C. border and pulled off at a small gas station for a drink. While I paid, I gave Sean the keys so he could head back out to the car.

It took me a little while to checkout and as I exited the store, I noticed Sean’s door opened and he was walking away from my car towards a man in a wheelchair. He was an older African American gentleman, with amputated legs and appeared ‘homeless’.

My first reaction, sadly, was “oh crap! He is hitting Sean up for money and has called him over.

But as I walked closer Sean had clearly had a short conversation with the man, turned around and headed back to the car. So I did the same.

As I entered the car, I asked him what that was all about.

‘Nothing Dad. I just was asking if he needed help.

He said no thanks, that he was fine but thanked me for asking.’

See, at first glance I didn’t even notice that the gentleman was attempting to cross a gravel parking lot, full of potholes, in a wheelchair using only his hands. I didn’t notice that my 11yo child was man enough to see this in the mirror of my car, drop his electronics he was playing, get out and offer to help the guy.

As we began to leave Sean asked if we could give the man some money. We pulled up beside him and I asked if he could use a few bucks.

He said ‘no thank you, I’m fine. Your son was a real gentleman and gave me all I needed today. God Bless.’

We rolled up the window and began to drive off. Out of the corner of my eye I saw Sean wave at him and he waved back with a huge smile on his face.

Would I have gotten out of the car and done the same?

I don’t post this looking for any praise for Sean. I post this to expose a real nastiness we have in our world. We spew such bile and hatred on every news channel, every Facebook post, every tweet. It’s not a right or left thing. We all do it. We have forgotten to look at the world through the eyes of a child.

Little Girl Wants To Dance, But Seconds Into Her Routine, 3 Brothers Barge In

Crowd Can’t Take Their Eyes Off Tiny Cowgirl, Then Her Unique Twist Has Crowd Going Wild

Tiny Boy Sees Girl Being Attacked By Karate Master, Decides To Take Matters In To His Own Hands

When The Drums Started, The Tiny Girl Couldn’t Hide Her Moves — She’s So Good 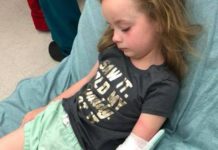 Mom Rushes Little Girl To ER After Waking Up Paralyzed Breaks Down When Dr.’s Look In Her Scalp